In the heart of winter, mornings can be brutally cold, and our guides take the edge off by providing hot water bottles and blankets for our guests going out on morning game drives.  The sun warms us through during the day, and as it goes down the blankets come out again. Having had no rain in months, July proves an excellent month for game viewing as the vegetation has thinned out, and animals continue to visit waterholes in their numbers.

Our guiding team noted many sightings of the smaller antelope this month, including duiker in various locations and the Sharpe’s grysbok and klipspringers at Mukuyu area in the West of the property. Sable were sighted in the south of the property, and there are signs of Roan antelope moving up from the southern boundary.

The southern section of the property, including Westwood vlei, provided great sightings of a whole variety of species, including giraffes, kudu and impala. Jackals continue to prefer this vlei area, and wildebeest remain settled here, particularly enjoying the company of the zebras. Huge troops of baboons are often seen along the vlei. There is also a lot of hyena activity in the area, and on one occasion, a spotted hyena was seen bravely making its way through a breeding herd of buffalo.

Up in the North, around Namakana and December pans and all the way up to the Zambezi river, the team had regular sightings of the usual suspects, including breeding herds of impalas and kudus, as well as bachelor herds of these species, and large troops of baboons and families of warthog. Good numbers of giraffes, zebras, jackal and hyena were also all noted.

A number of huge breeding herds of buffalo moved across the property throughout the month. From Mukuyu in the West to Twiza in the East, through the area around Gardiner pan, by the cliffs, down Kudu Alley and along the vlei systems. One week it was evident that there were at least three different breeding herds moving within Matetsi Private Game Reserve.

A small group of old male “dagga boy” buffalos still remain close to camp, despite the fact that lions took down a lone buff close to the lodge last month. Presumably they still feel some security from the presence of humans. This group of old male buffalos moved in closer to camp as they sensed lions, three females lions that were not deterred by the buffalo defence tactics (though all the dugga boys near camp seem to have survived this month).

The three female lions visited camp for several days in a row, enjoying some time by the River House Private Villa before moving off towards Gardiner pan, and down toward Westwood vlei where they took down a buffalo and were seen there for some days. There was plenty of other lion activity, with sightings including two different female lions at Sable pan, and a male lion about 10 min from camp. A different group of lions were seen at a beach site one morning with a warthog kill. They remained and were seen in the area for four consecutive days. With all this lion activity, we noted fewer sightings of other predators this month, with just a couple of sightings of leopard and wild dog recorded.

Breeding herds of elephant “were everywhere” through July. All the way from the north of the property, enjoying the lush vegetation on the islands of the Zambezi,  mud bathing along the tree line on the banks of the river, browsing along Kudu Alley, drinking freshly pumped water at December pan and Namakana pan, as well as at Sable pan to the East, Gardiner to the West and all the way through to Zanangubo, our most southernly pan.

Time on and along the Zambezi river gave great opportunities to see hippos and crocodiles too.

Katombora West, as in June, continued to prove full of interesting sightings, including an aardwolf that was seen by one of our patrol teams early in the month. Other nocturnal sightings across the property included small spotted genet, honey badger, African civet, serval and African wildcat.

Clever and Paise from our guiding team were also very excited to see an aardvark on Kudu Alley. This is a special sighting indeed. On Matetsi Private Game Reserve, we see their signs much more than the animals themselves. They are a highly nocturnal, crepuscular species. Winter is a good time to see them, just after or before the sunset when their pray of ants and termites are still crawling around, as on this occasion.

Whether out on a game drive on Matetsi Private Game Reserve, or relaxing on the banks of the Zambezi river, every moment is an opportunity for bird watching. Our guiding team even note species that they sight around the staff village. This month, our team made a particular note of the following: Half-collared Kingfisher in front of West Camp (special thanks to Sara Ellis), Dickinson’s Kestrel on vlei, Red eyed bulbul at Zebra pan, double-banded sandgrouse on Mangwe Road and at Namakana pan, three-banded courser on Kudu Alley, Kori bustards before namakana pan and all along the vlei, Verreaux’s eagle-owl in a notable Winter Thorn (Faidherbia albida), collared palm-thrush and speckled pigeon at the staff village, on one occasion a Tawny eagle, Bateleur and a committee of White-backed and hooded vultures we seen all together near Gardiner pan, as well as guinea fowls and Swaison’s spurfowls (with chicks) “everywhere”.

Many thanks as always to our team and guests for their invaluable contributions that allow us to compile these reports. In July we were fortunate to have photographs from Neil Fairlie and Michaela Hamilton of Reel Life Productions (IG: @reellifeproductions) and well as Crawford Moyo and Jono Hudson. 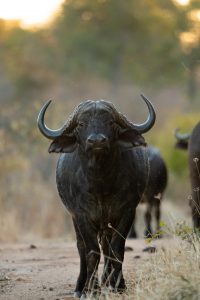 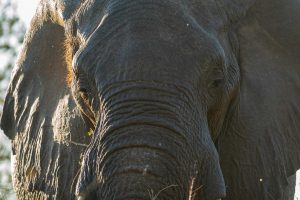 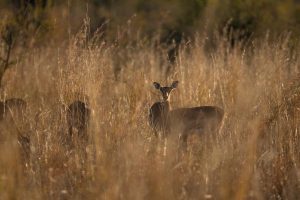 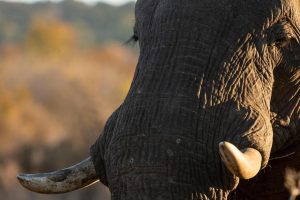 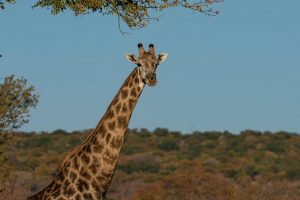 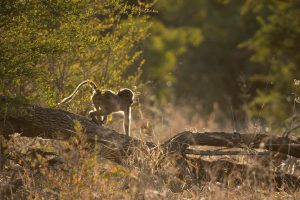 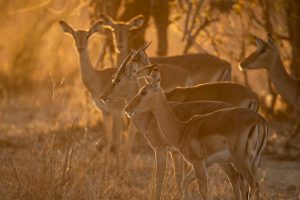 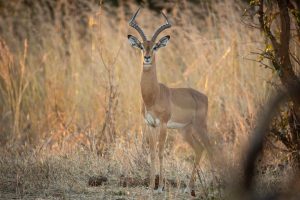 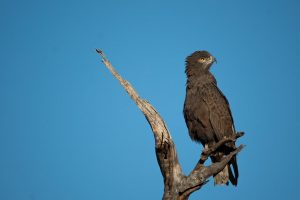 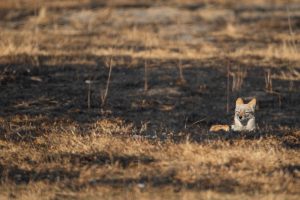 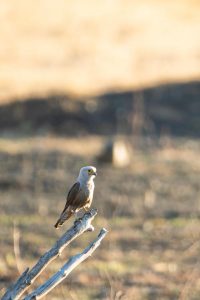 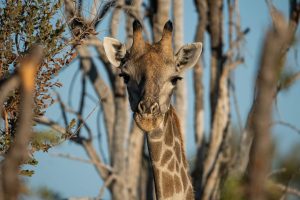